Have you ever used the adage, “blind as a bat?” If so, you may be disappointed to learn that you were incorrect. That is because bats are not actually blind. But don’t be ashamed if you always thought this; many people share the same misconception. The truth is that there are more than 1,100 bat species in the world, and not one of those species is blind. What’s even more interesting is that they actually have quite good vision, especially Megachiroptera species (fruit and old-world). This makes sense, as they are night-hunters. So, vision is important for darting and dashing for prey.

Not All Bats Have Echolocating Abilities

There are two main categories of bat species: Megachiroptera and Microchiroptera (also known as megabats and microbats). One of these bat groups have echolocating abilities, while the others do not.

Megachiroptera are large bats that live in tropical and subtropical climates. They maintain a diet of fruits and nectar, but some species are also known to consume small amphibians and fish. As for vision, Megachiroptera have large eyes and pronounced visual cortex that allow them to see very well. They also have a good sense of smell. Some species, like Flying Foxes, actually see well during the day, and are dependent on their daytime vision to fly around on moonless nights. They can also see in color!

Microchiroptera, or microbats, are different from Megabats in many ways; however, their vision is just as good. Despite their poorly developed small eyes, scientists have confirmed that microbats have both rods and cone photoreceptor cells in the retinas, giving them the ability to see in the day, in color, and at night. Furthermore, Microchiroptera (not all species, but most) have a built-in sonar system called echolocation, which emits high-frequency ultrasonic pulses into the air that bounce back and outline the surrounding environment. This is why many people believe these mammals are blind; but echolocation is simply a bonus attribute that allows microbats to hunt faster and better for insects like mosquitos, moths, flies, gnats, and more.

If you are experiencing nuisance bat problems in or around your property, you have safe and affordable options. Never attempt to catch, trap, touch, harm, or kill a bat. Not only are there possible laws against this, which could subject you to some hefty fines and other civil penalties, but bats also carry diseases, some of which are deadly. Always contact a licensed and insured bat removal and control company in Richmond, VA for non-lethal, licensed assistance you can trust.

Are you looking for cheap and humane ways to get rid of a bat on your property? Contact Virginia Bat Pros at 804-729-9097 for fast and secure bat removal services in Virginia, including Richmond, Salem, Leesburg, and all surrounding areas. We serve residential and commercial clients.

Do Bats Use Sounds to See?
The True Facts About Bats and Blindness
Will a Sonar Jammer Keep Nuisance Bats Away?

Bats are mammals that are a part of the Chiroptera order. The word “Chiroptera” is derived from the Greek word “hand-wing” in reference to a bat’s webbed hand-like wings. Chiroptera is the scientific classification of bats. There are thousands of bat species all over the world, but all species can fall under one of two main categories, Microchiroptera and Megachiroptera; colloquially referred to as microbats and megabats. Although recent evidence more so supports the division of bat species into Yinpterochiroptera and Yangochiroptera, it is still very common to use the terms microbat and megabat.

But since we don’t see any megabats in Virginia, continue reading to learn the top 3 traits of a microbat!

Although there are 15 species of microbat in our state, each species exhibits common microbat traits. The top three traits are ones that all microbat share, regardless of species: small, omnivorous, and echolocating.

Microbats are not called micro because they are big! Microbats are small in stature and size, which is why they are so good at finding places to roost. The average microbat can fit through an opening or crack as small as 3/8th of an inch. That is equivalent to the thickness of a pencil eraser! Take the Virginia Big-Eared Bat for example; although it is one of the largest Microchiroptera species in its range, it still only weighs an average of 7 to 12 grams (0.25 to 0.42 ounces).

Microbats are insectivores, which means they strictly eat bugs. They mostly dine on flying ones, like mosquitoes, flies, gnats, moths, wasps, and bees. They also will consume termites, dragonflies, grasshoppers, and beetles. A single bat can consume more than its own body weight in insects, in just one single evening. That’s an average of 1,000 insects or more.

Microbats use echolocation, much like dolphins and whales. Echolocation is a natural biological sonar ability that works by measuring the returning echoes of emitted signals that bounce off surrounding objects. Bats are not blind, but they use echolocation because it gives them a superior advantage when it comes to hunting and diving for prey at night.

Got Nuisance Bat Problems in Virginia?

Contact Virginia Bat Pros at 804-729-9097 for safe and humane bat removal and control at a fair price. Regardless of the size or scope of your bat abatement and cleanup needs, we have the experience and resources necessary to remedy your bat problem in no time at all. Our professionals are focused on safe and effective results, but more importantly, our client’s complete satisfaction. Contact us anytime for free estimates, advice, and assistance.

There are two primary suborders that all bats can be categorized in depending on their particular biologics and physiognomies. These suborders are Microchiroptera and Megachiroptera. Continue reading to learn about them both, and the attributes that set them apart.

Bats are part of the Animal Kingdom, and further broken down into narrower classifications, including the Chordata Phylum, Mammalia Class, and of course, the Chiroptera Order. Within the Chirptera Order, bats are categorized into one of two suborders: Microchiroptera and Megachiroptera. Also referred to as microbats and megabats, these suborders are quite different in size, diet, habitat, and more.

Microchiroptera bats are small, echolocating bats that maintain an insectivorous diet, with the exception of Vampire Bat species, which retain a dietary trait called hemotophagy, and consumes small droplets of blood on livestock like cows, horses, sheep, and goats. Other than Vampire Bats, microbats primarily eat a wide variety of insects, including moths, flies, mosquitos, grasshoppers, dragonflies, crickets, beetles, termites, ants, and more. It is rare, but some larger species of microbat hunt birds, lizards, frogs, smaller bats, or even fish. They generally roost in trees, caves, abandoned mines, and buildings in forested or wooded areas that are near bodies of water. Microbats make up the nuisance bat populations in our area of the country, with 9 species of bat native to Virginia. 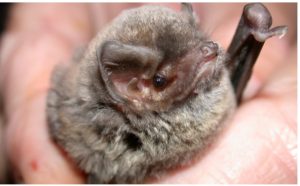 In appearance, microbats are much smaller than megabats. They have much smaller bodies and smaller eyes, but they are not blind. They can see quite well, and use their echolocating abilities to better dive and dart for prey. Microbats also lack the claw at the second finger of the forelimb. As for ears, microbats have larger ears that retain a tragus, which is thought to aid in echolocation. Megabats have small ears and no tragus, but large visual cortexes that allow them to see well.

Megachiroptera bats only includes one family, Pteropodidae, but can be further narrowed into 7 Subfamilies, including Nyctimeninae, Cynopterinae, Harpiyonycterinae, Macroglossinae, Pteropodinae, Rousettinae, and Epomophorinae, and 166 different species. Also known as megabats, old world fruit bats, and simply, fruit bats, Megachiroptera is a significantly different suborder of bats compared to Microchiroptera. They are much larger in size, and live in tropical and subtropical climates. The most significant difference is that they do not possess echolocation abilities, nor do they eat insects.

Instead, megabats have large eyes and have great vision. Furthermore, they maintain nectarivores and frugivorous diets that primarily consist of plant material, such as fruit, nectar, or pollen. Megabats make their homes in trees, shrubs, and sometimes caves located near edges of water. They play an integral role in the surrounding ecosystem because they help to spread seeds and pollen through feeding and elimination.

Call Virginia Bat Pros at 804-729-9097 for safe and humane bat removal and control assistance in Old Dominion. We serve all of Virginia, including Richmond, Petersburg, Short Pump, Lynchburg, Charlottesville, Norfolk, Chesapeake, Newport News, Virginia Beach, and all of their surrounding areas. We offer 24 hour bat removal, as well as, numerous residential and commercial bat exclusion services, such as bat cleanup and restorations for bat damages. We even provide insurance work! Contact us today for a free estimate.